Ever wonder about if your Samoyed could be a drug detection, bomb detection, etc. dog? Well, they could – however; it’s much more fun to just do the sport of Nose or Scent work with them. No drugs around, no bombs around – just birch, anise, clove, and a few other odors, tightly locked in airtight containers.

Nose work as a dog sport has been around for a few years now and there are new organizations forming each year to expand the number of nose work trials around the country. There is the original NACSW (National Association for Canine Scent Work), SDS (Sniffing Dog Sports based in Santa Rosa, CA), USCSS (US Canine Scent Sports based in Southern California), and UKC (United Kennel Club) and AKC (American Kennel Club). All are very similar in what the dog is expected to do for a title, but all differ in some way. Some you can get a title in a day, others you need to earn more than one leg in each element – but they all are exciting and fun for both handler and dog. 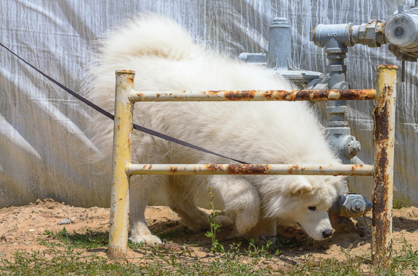 Most dogs use their noses to follow scent of food, other dogs or animals, humans, etc., etc. – so why not encourage that behavior in a positive fun way and teach them to identify odor. It’s really simple to start – all you need is:

You will cut the Q-tips in half and put about 20 in one of the jars and then drop a very few drops of oil in the jar, shake well and ensure the lid is screwed on tightly. Label the jars as to which odor is in which jar so odor isn’t mixed.

To start, most will accumulate a few cardboard boxes (shoe boxes, shipping boxes, etc) and then while the dog is watching, put some treats in one (make sure it’s marked so it is the only box contaminated with the food) and tell the dog to find or search. Most will run right to the food, eat it and get lots of praise. Once they love the ‘find’ game, put out a few more boxes (clean ones with no food) along with the one with the food so 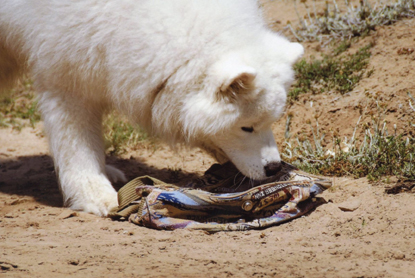 the dog has to actually sniff harder to find the food. After a few days of ‘find’ training, you can put a tin with 3-4 Q-tips, which have been in your odor jar, in with a treat. That way the dog is still sniffing for the treat, but smells the odor at the same time. Next step will be to have the odor tin only and see if your dog can find it. If so – GREAT!!! If not, pair with food for a while longer.

Once the dog is finding odor in boxes, try hiding the tin around the house in easy places or in your backyard and then progress to go other places where there are distractions of food, people, perhaps other dogs in the area and set your hides. Always start out and end with something really easy like a box hide so the dog succeeds.

This is one sport where praise and reward (toy or food) is encouraged. In fact you can feed your dog in trials when the odor has been found – and if you don’t, most judges will remind you to reward with praise, food or toy. It is the handler’s responsibility to call ‘ALERT’ when the dog finds the odor – dog can have any response, sit, down, stand and look at handler, etc.

A number of different titles can be earned depending on which organization you decide to trial with. Some specific element titles, such as containers, interior, exterior, vehicles or some overall titles at different levels. Most start with one hide/one odor and progress up to more hides and more odors.

There are a few active Nose Work Samoyeds across the country and it’s a game that they like particularly since most are chow hounds and want food reward. Some in the mid-west participate in UKC scent work – not currently held in California. AKC just started their program in October – so some are participating there and then there are a very few doing NACSW and SDS.

Shown in the pictures in this article is Bode at a few trials. His response to finding odor is a sit.